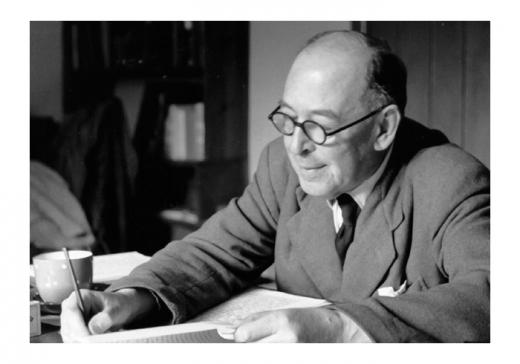 In other words, do not let us begin by exaggerating the novelty of our situation. Believe me, dear sir or madam, you and all whom you love were already sentenced to death before the atomic bomb was invented… It is perfectly ridiculous to go about whimpering and drawing long faces because the scientists have added one more chance of painful and premature death to a world which already bristled with such chances and in which death itself was not a chance at all, but a certainty.

If we are all going to be destroyed by an atomic bomb, let that bomb when it comes find us doing sensible and human things—praying, working, teaching, reading, listening to music, bathing the children, playing tennis, chatting to our friends over a pint and a game of darts—not huddled together like frightened sheep and thinking about bombs. They may break our bodies (a microbe can do that) but they need not dominate our minds…

What the atomic bomb has really done is to remind us forcibly of the sort of world we are living in and which, during the prosperous period before, we were beginning to forget. And this reminder is, so far as it goes, a good thing. We have been waked from a pretty dream, and now we can begin to talk about realities…

It is our business to live by our own law not by fears: to follow, in private or in public life, the law of love and temperance even when they seem to be suicidal, and not the law of competition and grab, even when they seem to be necessary to our own survival. For it is part of our spiritual law never to put survival first: not even the survival of our species. We must resolutely train ourselves to feel that the survival of Man on this Earth, much more of our own nation or culture or class, is not worth having unless it can be had by honorable and merciful means.

Nothing is more likely to destroy a species or a nation than a determination to survive at all costs. Those who care for something else more than civilization are the only people by whom civilization is at all likely to be preserved. Those who want Heaven most have served Earth best. Those who love man less than God do most for man….