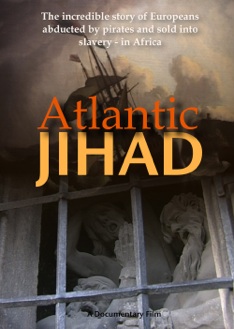 Whilst the Arabs have been acknowledged as a prime force in the early usage of slaves from Africa, very little has been written about their usage of White slaves, whether they were part of the Russian slave trade or those kidnapped by Arab pirates. However, in recent years, the research of some authors has been bringing this issue to light
The origins of African slavery in the New World cannot be understood without some knowledge of the millennium of warfare between Christians and Muslims that took place in the Mediterranean and Atlantic and the piracy and kidnapping that went along with it. In 1627 pirates from the Barbary Coast of North Africa raided distant Iceland and enslaved nearly four hundred astonished residents. In 1617 Muslim pirates, having long enslaved Christians along the coasts of Spain, France, Italy, and even Ireland, captured 1,200 men and women in Portuguese Madeira. Down to the 1640s, there were many more English slaves in Muslim North Africa than African slaves under English control in the Caribbean. Indeed, a 1624 parliamentary proclamation estimated that the Barbary states held at least 1,500 English slaves, mostly sailors captured in the Mediterranean or Atlantic.
Millions European Christians were kidnapped and enslaved by Muslims in North Africa between 1530 and 1780 — a far greater number than had ever been estimated before.

One of the things that both the public and many scholars have tended to take as given is that slavery was always racial in nature — that only blacks have been slaves. But that is not true, We cannot think of slavery as something that only white people did to black people.

Slavery in North Africa has been ignored and minimized, in large part because it is on no one’s agenda to discuss what happened.

The enslavement of Europeans doesn’t fit the general theme of European world conquest and colonialism that is central to scholarship on the early modern era, he said. Many of the countries that were victims of slavery, such as France and Spain, would later conquer and colonize the areas of North Africa where their citizens were once held as slaves. Maybe because of this history, Western scholars have thought of the Europeans primarily as “evil colonialists” and not as the victims they sometimes were.

Between 1580 and 1680. That meant about 8,500 new slaves had to be captured each year. Overall, this suggests nearly a million slaves would have been taken captive during this period. Using the same methodology, Davis has estimated as many as 475,000 additional slaves were taken in the previous and following centuries.
The result is that between 1530 and 1780 there were almost certainly 1 million and quite possibly as many as 1.25 million white, European Christians enslaved by the Muslims of the Barbary Coast.
Enslavement was a very real possibility for anyone who traveled in the Mediterranean, or who lived along the shores in places like Italy, France, Spain and Portugal, and even as far north as England and Iceland.from 1500 to 1650, when trans-Atlantic slaving was still in its infancy, more white Christian slaves were probably taken to Barbary than black African slaves to the Americas,

Pirates (called corsairs) from cities along the Barbary Coast in north Africa — cities such as Tunis and Algiers — would raid ships in the Mediterranean and Atlantic, as well as seaside villages to capture men, women and children.
The impact of these attacks were devastating — France, England, and Spain each lost thousands of ships, and long stretches of the Spanish and Italian coasts were almost completely abandoned by their inhabitants. At its peak, the destruction and depopulation of some areas probably exceeded what European slavers would later inflict on the African interior.

We have lost the sense of how large enslavement could loom for those who lived around the Mediterranean and the threat they were under,” he said. “Slaves were still slaves, whether they are black or white, and whether they suffered in America or North Africa